In March 1942, the trade-unionist Christian Pineau secretly flew to London from Nazi Occupied France, seeking to connect his resistance network with the broader efforts of the Free French based in London. Upon arriving, he was granted an audience with General Charles De Gaulle, and they dined at the Connaught hotel in Mayfair. There he discovered the difference between the internal resistance being carried out by ordinary people in France and the grander vision of De Gaulle in London: Pineau reflected,

‘We look at the problem from the perspective of Liberty; he conceives it from the point of view of History.’[1]

Emmanuel Macron has often courted the imagery and symbolism of General Charles De Gaulle, the iconic leader of the Free French and the founder of the French Fifth Republic. Look back to Macron’s inauguration, when he decided against a limousine, and instead rode along the Champs Elysée open top on a military vehicle. Look also to Macron’s official presidential portrait, with De Gaulle’s Memoires de guerre open on his desk. Macron, almost as much as De Gaulle, seems to view his presidency from the point of view of History. 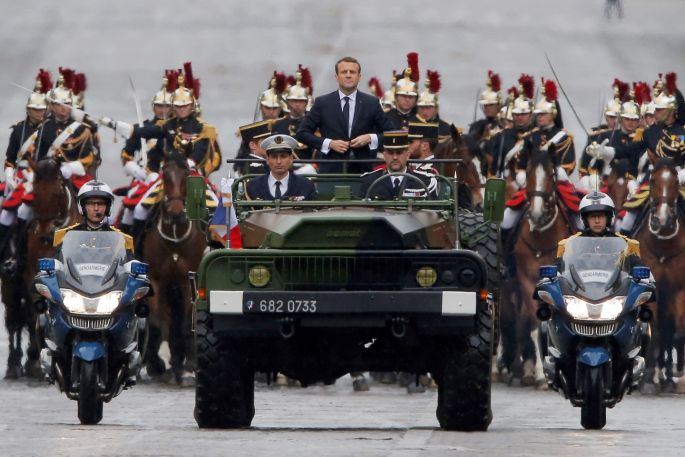 In most of the ways that matter, however, Macron isn’t really a Gaullist. He plays with the imagery created by De Gaulle in forging the central mythology of the French Republic, and has echoed some of these key messages in his appeal. His election was more reminiscent of that of the first election of Barack Obama in the USA, blurring the lines between tech start-up and right-on social movement. Macron deployed a dynamic political machine (often headhunted from the private sector) in service of an attractive yet openly ambiguous political leader. More traditionally French has been his ‘Jupiter’ persona cultivated in office, casting himself as above the fray of the political rabble. This plays upon the providential role of the President, which his predecessor Francois Hollande had chipped away at with his down-to-earth Monsieur Normale persona. As well as restoring a sense of grandeur to the office, this is ultimately reflective of Macron’s lack of desire to engage in the traditional back and forth of the French parliament (the Assembly).

The most common political comparison has been to consider Macron a modern incarnation of Valery Giscard d’Estaing, the former President from 1974 to 1981. Giscard, elected President aged 48, was also a young technocrat with a background in economics and a taste for the bombastic, monarchical style of government. Indeed, this similarity didn’t go unremarked in the build-up to the election, with the ill-fated Socialist Party candidate Benoit Hamon mocking Macron for trying to dupe the French public with a ritzy marketing push for reheated Giscardien policies.[2] He has also been compared to Michel Rocard, a political innovator sometimes called ‘the best President France never had.’ Rocard famously supported the PSU, an offshoot party which tried to challenge the traditional hierarchies of the Socialist Party, and force it to update its appeal to the electorate. When Rocard tried to become the Socialist Party candidate for the Presidential election in 1981, he sought to create a ‘big bang’ on the French left which might displace the establishment, and unite the Greens, the far left, and so on.[3] Rocard lost out, beaten by the big beast of the left, Francois Mitterand. The lessons of these two predecessors do seem to have been learned, and there are indeed echoes. Like Giscard, Macron is trying to change France’s relationship to the market while keeping a toe in the centre. Like Rocard, Macron conjured up a ‘big bang’, capitalising on crises of leadership in both mainstream parties.

Macron attracted a lot of international support during the election, and admiring glances from any number of world leaders (who can forget that embarrassingly staged phone call with Obama). This support seemed based on a very different type of resistance to that of General De Gaulle. Instead, Macron seemed to be facing up to a wave of right wing politics and buck the trend of depressing electoral results ‘chez les Anglo-Saxons’.[4] In this, he represented a distinctly French defiance, yet also faced down the threat of France’s own shadowed past. The Front National, with all its echoes of France’s wartime collaboration and lingering resentment of losing its imperial presence in Algeria, offered simple answers to complex questions. Marine Le Pen, the daughter of the party’s odious founder, built her appeal on the distinctive architecture of populist values: a majoritarian foundation, supporting crumbling professional and local values behind the guarded barricades of nativism. Her trick was to render that message somehow less devilish. Yet in shedding the baggage of French history, the Front National took on the taint of contemporary international allegiances. As Marine Le Pen was pictured waiting to meet Trump, shaking hands with Putin, or being interviewed by the villainous Nigel Farage, she seemed more part of a wave and less on the crest of it. This ultimately weakened their appeal, and Macron’s great success in the election was to short circuit those simple answers with his own simple appeal: he asked the French to believe in him. That belief was in the vague promise of change, and in resistance to both the worst elements of France’s past and of international pressure.

Yet now that change needs to be delivered, Macron’s most immediate task, and perhaps his defining challenge, will be the labour laws currently being implemented. He has gambled on an early round of reforms to ride out the damage that this will cause him, hoping that a resurgent economy will lift all boats by the time the next election comes around. The reforms are popular internationally, though that fact in itself doesn’t play well in France.

“’This very much resembles the labor reform carried out in Germany in 2004-2005,’ said Florian Hense, European economist at Berenberg Bank. ‘This could very well propel France to a golden decade like Germany had.’”[5]

This is a gamble on a national scale. But winning the wager doesn’t bag the prize. By aligning himself with international markets and supranational forces, Macron places himself against another form of resistance, and one which has a much longer tail. The celebrated ‘French Exception’ has sold as many cookbooks as political textbooks, but does represent a nuanced, accented engagement with Western political and economic norms. Criticisms have long been ranged against ‘pensée unique’ or one-track thinking, which says that there is only one way to live, to work, and to trade (with that one way being strongly associated with the Americans). In his labour reforms, Marcon has ushered in the erosion of hard-won employment protections which mark the difference of the French social compact. He is increasingly being cast as the face of globalism. When that face was turned against the forces of radical right-wing nationalism it looked steely and resolute, though when it looks upon the traditions of France’s workers, its farmers, and its young people, it looks unfeeling and remote. This is the space in which the far-left candidate Jean-Luc Melenchon traded in the run up to the election, and it’s where Macron is weakest going forward. He will soon find out a lot more about the resistance of the streets.

Like De Gaulle, then, Macron does not seem to view his Presidency from the perspective of Liberty – of France’s traditional political manners, nor its trumpeted cultural exceptions. Rather, his success to date, and perhaps his difficulties to come, stem from his viewing the Presidency from the point of view of History. During De Gaulle’s Presidency, the celebrated General passed from a man of the Resistance, to a much-resented figure of staid traditionalism. In 1968, when general strikes parlayzed France and photogenic student protests crowned a national movement, De Gaulle looked set to fall as the symbol of an old regime. He weathered that storm, but not by much, and it showed how even the hardest won political currency can lose its value.

If you’ll allow me one last echo of resistance, in 1977, on the eve of the European Parliamentary elections, Madame Giscard d’Estaing, the President’s wife, was guest of honour at the Special Forces club in London. In her address to that dinner, she spoke of her father Colonel de Brante, a celebrated resistant, and also of the legacy of Franco-British cooperation (one we all hope endures). But she also said something which perhaps speaks to Macron’s difficulties in trying to present himself as simultaneously the inheritor of the Republic’s legends and a disruptive agent of change. She said, and I quote: “There is something both strange and moving about finding oneself in the heart of a legend.”[6]