This is as much a personal as a public exercise, but it seems like a good piece of intellectual accounting to be done at the end of the year. Reading last year’s review feels an odd and interesting experience. Much of it is past, though a lot of it lingers. I’m reminded of how my past has shaped me, and how I will be shaped by events that I haven’t yet experienced. In repeating the task, I’ll stick to last year’s format, in order to keep a little consistency and to help me compare in future.

Last year’s milestones look a lot like this year’s, and I’m pleased to feel like I’m moving in the right direction. I’m going to try and keep this a little shorter than last year’s entry!

As last time round, here’s the diary of Andrew Smith, aged 29 and three quarters.

Most of my efforts have been directed at preparing my first academic book, Terror and terroir: The winegrowers of the Languedoc and modern France. I’ve submitted the manuscript, and I’m expecting to get proofs sometime soon. I revised my thesis a good deal, and during that time fell back in love with the topic. I feel really pleased with what the book does, and discovered interesting new avenues for research during revision. It’s due to come out in Autumn 2016, and I’m really excited to see it in print. I feel it is a big milestone in my ambitions to be an academic, and feel excited and nervous about my research getting out there.

The article that I co-wrote with my friend James Hawkey appeared in Modern and Contemporary France. The article is titled ‘‘From the soil we have come, to the soil we shall go and from the soil we want to live’: Language, Politics and Identity in the Grande Révolte of 1907’. It was an interesting collaborative and inter-disciplinary project and I was delighted when we completed it. There were challenges in the review process (I think we had one linguistician and one historian as reviewers, with very different priorities), yet ultimately we produced something that offered a different insight into linguistic politics and identity in the Languedoc.

I also had an article accepted after revision for Historical Reflections/Réflexions Historiques, called ‘African Dawn: Keïta Fodéba and the Imagining of National Culture in Guinea’. The article speaks to my research interest in decolonisation, and looks at the intersection of culture and politics in shaping national identities. Unfortunately, the journal is jam-packed with special issues, so the article won’t appear in print until 2017. Still, that is something to look forward to!

I’m continuing to work on an edited volume based on the conference that I had organised with my friend Chris Jeppesen at UCL. We’ve had some challenges in reticent and delayed contributors, though the submissions we have received are excellent. I’m submitting a chapter, and am really pleased with the piece I’ve managed to pull together. I think it’s an original and creative piece of history that I’m excited to put out there.

Conference-wise, I’ve been to some really good events. The SSFH conference at St Andrews was a fantastic excuse to revisit one of my favourite places as well as a febrile situation to explore other people’s research and my own. I also took over the post of Secretary at the Society for the Study of French History – and here you can see an appropriately blurry picture of the official symbolic handover taking place between me and Sandy Wilkinson at 2 in the morning, well refreshed on the Swilkin bridge. 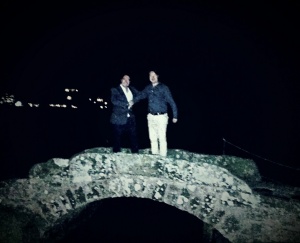 I also went to some fantastic events on France and Britain in the Second World War, first at Strathclyde, and then at the British Ambassador’s residence in Paris. These were both interesting events that encouraged me to try and get my stalled article on secret flights during the Second World War. I also went to some fascinating events on ‘Imagining Markets’ organised by the vibrant department at Exeter, and a fascinating conference in Portsmouth on ‘Progress, Change and Development’ during which I got to give a paper on the same panel as Jaques Sauvageot. Also, I gave a paper at the fascinating New Directions in French History conference (from which posts have been appearing on the French History Network Blog).

I’ve continued blogging alongside all this, and looking back at the list of posts is a bit staggering owing to the volume of them (20 posts across the year, most of them around 1,000 words). The most read were probably those around the General Election, when a tsunami of ink was spilt in prognostications and excuse making afterwards! Still, I’ve found it an interesting and useful process for exploring ideas, and clearing up my own thoughts. Likewise, it’s helped profile-wise, and I’ve ended the year with a series of appearances on Sky News to discuss French politics in historical context, which have all proven fun, and may yet lead to interesting new collaborations.

I was delighted to get a 3 year full time position as a Teaching Fellow at UCL. I’m covering for Professor Axel Körner, who had won a big research grant. This meant I took over one of his undergraduate courses, and am teaching two MA courses which I got to design myself. It’s wonderful to have a bit of security at last, and to know where I’ll be and what I’ll be doing at the end of the year.

I’ve been able to do some really interesting things in my undergraduate course on the European fin-de-siècle, incorporating object-based learning at the UCL Art Museum, and e-learning through the establishment of a class Tumblr (http://uclfds1.tumblr.com). Delivering this course has been a great experience, and I’m about to repeat it for the second term. It has also awakened some research interest for me, and I’m tentatively exploring some ideas about Charles Rennie Mackintosh and his connections to France (and the Roussillon).

My other MA course was on Vichy France, and this has encouraged me to reengage with an article I’ve had on the back burner for a while (the stalled one I mentioned above). I’ve also done some teaching on the core course for the MA in Transnational Studies, which has been an exciting chance to offer enthusiastic students new ideas. Next term I have another new module on Regionalism in Modern Europe to deliver. Lots of work ahead!

The biggest thing to happen to me this year is that my wife is pregnant! As I write, she’s 19 weeks pregnant: nearly halfway! What a wonderful, terrifying and transformative thing.

We found out Holly was pregnant after getting back from a christening. We were up in Sale, just outside of Manchester, for the christening of our friends James and Eve’s daughter, Minerva. They very kindly asked Holly to be young Minnie’s Godmother, and she was beyond delighted to accept. Holding young Minnie now that I know I’m going to be a father is a humbling experience. 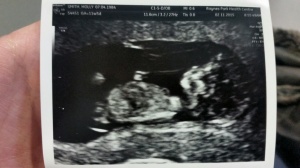 We’re going to have to move house, and that will be a new adventure, after living in Putney for over 6 years. This will hopefully happen early in the New Year, and promises new horizons for me.

We were in the United States this summer visiting friends, firstly in Chicago and then in Monterey. It was wonderful to see Jane and Rob up north, before seeing Ethan, Karen and their daughter Hannah in Southern California. We embarked on a big coastal road trip, and it was a fantastic jaunt, during which we made up our minds about having a child. It seems like it took a fortnight for things to happen, which was a turn up for the books!

One very negative experience this year was the death of one of my personal tutees. She had been struggling with illness, and I met with her often over the course of two years to speak to her about her feelings and her outlook. She was a bright, promising and capable person who had a lot to offer the world. Her death was an awful, needless tragedy. I felt absolutely crushed by the sadness of this, and found it very difficult to rationalise. I attended her funeral with my Head of Department, and my own grief was as nothing compared to that of her family.

Awful moments like this demonstrate to me the importance of counting my own blessings. They put me in mind of the lyrics of the Pearl Jam song ‘Sirens’, reminding me of the fragility of the lives we lead, and to consider the anchors in my own life. For that, I’m delighted that I will be adding another to my life. Having a child with my wife, Holly, is the most breathless, wonderful challenge I think I could possibly face, and I’m looking forward to every minute of it.